Voon: Sarawakians against proposal to recognise Sarawak as Wilayah 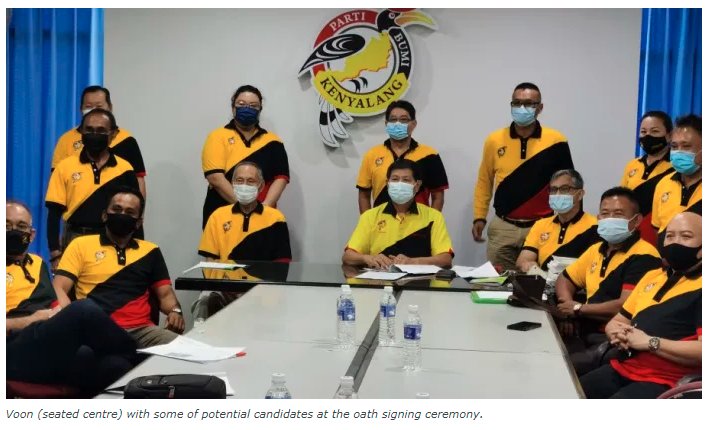 SIBU, April 9: The people of the State are against the proposal to recognise Sarawak as a Wilayah (region) when, in fact, it is a country on its own. Parti Bumi Kenyalang (PBK) president, Voon Lee Shan said that as the Malaysia Agreement 1963 is an international agreement that superceded the Federal Constitution, the Malaysian Parliament could not amend it to reduce the status of Sabah and Sarawak as a country to a state.

“The Federal Constitution which was amended in the 1970s had reviewed the status of Sabah and Sarawak as a country into a state which is equivalent to any state in Malaya. “This is not acceptable by the people of Sarawak and also PBK,” he said when speaking to reporters after an oath signing ceremony by its potential candidates for the coming State
Election.

The fact that Prime Minister Tan Sri Muhyiddin Yassin said Sarawak is known as Wilayah, Voon said further downgraded the status of the State. “This is even smaller than a state like Labuan. What we want now is for Sarawak to be reversed into its former position as a country by itself pre-Malaysia time,” he said. PBK, which is expected to field 82 candidates at the next State Election, he said is fighting all out with the hope of capturing the State government and later set the State free from the Federation of Malaysia by legal means.

“So we urge the people of Sarawak to stand solidly and to support PBK so that we can restore back our dignity and sovereignty, free from Malaysia and become an independent nation with Sarawak flag flying and known to the whole world,” he emphasised.

On the oath signing ceremony, he said it involved only 15 of the potential candidates in the central region as the rest could not make it today due to restricted movement order. The next one will be in Miri at the end of April.

“We will only make public the names of the potential candidates after everybody has signed the oath,” he said.