The impact of an emergency declaration 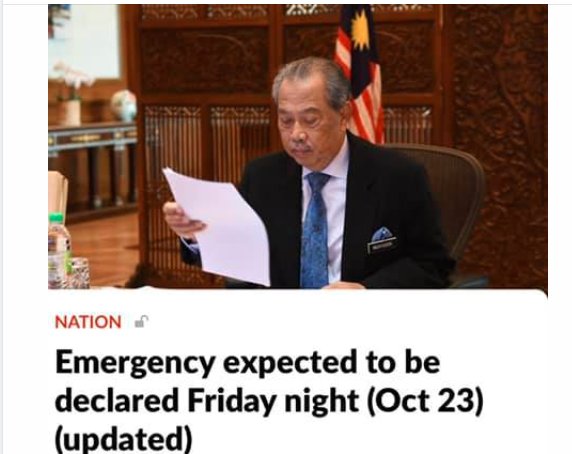 Under Article 150 (1) of the federal Constitution, the King may issue a Proclamation of Emergency if he is "satisfied that a grave emergency exists whereby the security, or the economic life, or public order in the Federation or any part thereof is threatened."

The situation now is one of political instability coupled with public health issue because of the resurgence of Covid- 19. It is not a security or a public order issue.

The public health situation coupled with the political instability may cause a threat to the economic life of the nation. This is so because of the Parliament sitting next month to debate and apporve next year budget. If the budget is not passed and the country is forced to have an election because of the no confidence in the present government and with the increasing number of Covid-19 cases, then the country's economy will be adversely affected. An election will also be bad for public health as the virus is not under control.

But is this a good reason to declare an emergency? Is it more driven by politics rather than economics? These are questions the King have to consider.
The next question is the type of Emergency. Will it be like the 1969 emergency? It should not as this time its not about security or public order.

The closest comparison will be the 1966 Emergency declaration on Sarawak when the government of the day was unstable. The federal government imposed the emergency to basically replace the then chief Minister, the late Stephen Kalong Ningkan. Daily life went on normally. The only restrictions were on the State Assemblymen due to the suspension of the State Legislature.

Regardless whether an emergency is declared or not and if so, the form of the emergency it takes (1966 Sarawak version or 1969 version), the country's economy will be adversely affected. The uncertainty it is creating will impact on the economy badly.