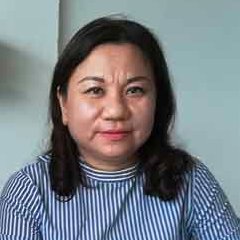 Jamie Tiew, the president of the Sibu Business Women Association, said that as Sarawak’s silver-hair population has increased, the government should establish more complete mechanisms and policies for the care of the elderly, and introduce more effective protection measures for the elderly regardless of ethnic and religious background.

She said that although Sarawak and the Commonwealth both have welfare departments and have formulated some related policies for the welfare of the elderly, it is regrettable that the implementation has been biased due to human factors. The welfare materials and resources for the elderly are limited or lacking and cannot effectively benefit related groups or the elderly.

She gave an example of the Kenyalang Gold Card launched by the Sarawak government. Many organizations, including political parties, have assisted in submitting applications. However, the number and efficiency of approvals are disappointing. Many elderly people still wait for a long time for the relevant government agencies to issue them.

"I have communicated and inquired with the local Enos Elderly Association , and found that out of more than 100 Kenyalang Gold Card applications submitted by NGO organizations, less than 30 have been approved. Outsiders have no way of knowing the crux of the problem. However, this should not be the original intention of the government to provide welfare for the elderly."

Tiew Yen Houng, who is also the central committee treasurer of the Party Bumi Kenyalang of Sarawak, said that if the Sarawak government is really sincere to issue more benefits to the elderly through the Kenyanlang Gold Card, all seniors aged 60 years old will automatically issue a gold card. Application procedure is unnecessary and time wasting prompting Sarawak people to suspect there is utterior motive or political agenda behind it.

In addition to the established benefits of Kenyalang Gold card , it also has any auxiliary benefits. The government's publicity work in promoting the card is also disappointing. In Sibu, the number of merchants associated with the Kenyanlang Card is very limited, which highlights the inadequacy of the responsible department or unit in the relevant work, and also makes the benefits of the gold card negligible and unattractive.

In addition, she said that in the state and federal welfare departments, the welfare conditions and qualifications provided to the elderly are not very clear. Many elderly people facing financial and daily living conditions problems do not know how to apply. Inevitably they turned to political parties or social leaders for help.

In fact, Tiew said that the Ministry of Welfare has failed to effectively inform Sarawak public the benefit and welfare of the elderly, without taking into consideration of language barriers, personal processing capabilities, and promotion of major events, which resulted in the already limited welfare resources unable to effectively benefit the elderly in need.

“I don’t know how to apply; I don’t know how to follow up; because the welfare content lacks large-scale promotion and explanations and is not universal", these are the most common problems encountered by the elderly when applying for welfare assistance. At the same time, private elderly organizations or units It’s common to notice when applying for grants often met with low approval rates or often no follow-ups."

She emphasized that because the government's work on elderly welfare is not in place or the assistance provided is very limited, or the application is not accepted and cannot meet the actual needs, some related groups are forced to turn to the community or associations for help.

The Sibu Business Women’s Association is fortunate to participate in such a plan. Every year, it provides financial and material assistance to some elderly groups so that they can successfully organize some activities to improve the quality of life of the elderly members.

"These old Songling organizations play a vital role in making up for the government's lack of welfare for the elderly, including providing food to helpless elderly people and solving their problems in life. It is regrettable to know that when they apply for funding from the government, they often return without success or have extremely limited financial assistance."

Tiew Yen Houng said that the ageing of the population is a very real problem. Everyone will get old. Today's high-ranking government officials will also get old. And as the population ageing rate increases, if the policies and benefits provided cannot meet actual needs, the social problems we face will become acute.

She believes that if the government or relevant agencies are really 'inexperienced' with the elderly policy, they can refer to the elderly welfare mechanisms in Singapore, Taiwan, Japan, and Australia. I believe they will definitely find inspiration and derive better procedures and provide better assistance to the elderly in Sarawak.

"The Sarawak government has put forward many questionable policies in recent years, including the light rail, 7G, automotive technology, airlines, etc., which are not practical. If the agenda behind it is to win the support of the people in politics, it will definitely fail to achieve the goal. It is better to establish a down-to-earth mechanism and policy for the welfare of the elderly to win the heart and mind the people."

She called on the Sarawak government to strengthen its social welfare assistance and reduce some unrealistic "crank thinking" in return for the people's support for them in the past 50 years, instead of still adopting the political tricks of "painting cakes to alleviate hunger" to divert people's attention !