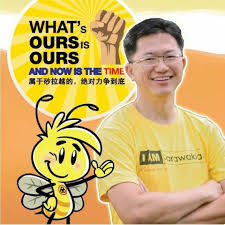 The difference between the Sarawak of today and that of 1976 is that the people of Sarawak now has awaken.

Sarawak today is much nore aware of what are the rights due to Sarawak under the MA63 and the IGC Report than when Malaysia was formed 56 years ago. That critical part of our country's history was and continue not to be taught in our schools.

For more than 50 years, most Sarawakians were not aware or not able to defend its rights. Most of its leaders were ignorant about MA63. History one day will judge the leaders of that generation. Some did stood up to bravely to defend the rights enshrined in the international agreement of MA63 and ended up paying heavy prices with their liberty and some even with their lives.

No political units formed before 1963 foresaw the abuses that the Malayan master would inflict on the States of Sarawak and Sabah, except for the founding members and early leaders of SUPP who believed that Sarawak was not ready to be part of Malaysia. SUPP fought for Sarawak to be independent before considering whether to be part of Malaysia. SUPP did that precisely it's leaders saw the danger of Sarawak being overwhelmed by the more advanced society of Malaya and that we would not be able to defend our corner.

History has shown and proven that SUPP was correct. Yes, SUPP has told you so.

The now defunct Sarawak National Party (SNAP) was also at the forefront in fighting the erosion of Sarawak rights. Their MPs bravely fought against the interference by Malaya in 1966.

Much sadness has happended to Sarawak over the past few decades. Our wealth and power has been taken away. Our children has to leave our shore for Malaya to work in the market and industries largely banked rolled by the wealth from the children's motherland. That has happened and we can't change the past. But we can change the future by stopping further encroachment and abuse and seek the restoration of all teh rights due to Sarawak and Sabah. Including having 1/3rd of the parliamentary seats. We must move forward and strive for a better future for our anak Sarawak.

Moving forward, all the State Assembly persons and more importantly, Sarawak's member of parliament must now stand firm and reclaim all the rights we have lost. These elected representatives must now fight to ensure that these rights be restored to what was promised to us - equal partners of Malaysia. Nothing less. Not one inch.

The motions yesterday put forth in the Sarawak Assembly is a clear signal that Sarawak has awaken.