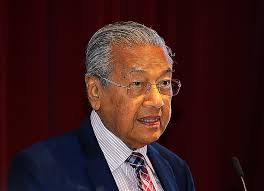 Basically Mahathir talk how back then when he was the 4th Prime Minister, he didnt really bothered much about the relationship and system of Malaya w/ Sabah & Sarawak and he just followed what his predecessors system back then. Only now did he and PH realized that the relationship between Malaya and SS was not 13 states but rather it's own entity (wilayah) .


He talked about PH promising to increase the oil royalty from 5% to 20%, "maybe" returning back 50% of the tax coming from Sarawak back to Sarawak and also giving freedom to Sarawak to manage their education and health sectors.
These were agreed amongst the PH members and other items will be ammended in order to fulfill MA63

He addresses how poverty in SS is worse than in Malaya. Talks about how Malaya was way more advanced than SS during their independence but it's Malaya's responsibility to bring up SS.

He says now it's better for investing in SS industries as there's better infrastructure. The Government feels that they should support these industry so that foreign direct investments come into SS.
He also talks how SS have a lot of local attractions that aren't fully used by both SS and Malaya which can help to increase jobs and help the economy to grow
he also talks how in Malaya, people have to hire foreign workers to use very machinery and stuff whereas in SS, we apply our own workforce to operate these machine to the point that they're specialised in them and are sent to South America and Africa
Hence, he feels that SS needs more opportunities to grow technical skills.