On 27 May 1961, Tunku Abdul Rahman, the Prime Minister of the Federation of Malaya, announced a plan with foreign correspondents at Adelphi Hotel in Singapore to form “Mighty Malaysia” with the inclusion of Singapore, Sarawak, North Borneo (now Sabah) and Brunei as part of his plan. 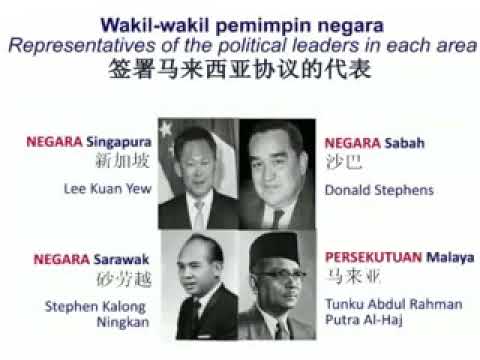 This was opposed as “Mighty Malaya” by the peoples of Sabah and Sarawak and Brunei who denounced it as the re-colonization of the British colonies. Many lost their lives and liberty in opposition to the Greater Malaysia idea.

However, Brunei opted not to be part of the Mighty Malaysia plan after Brunei rejected Malayan demands to hand over control of its petroleum resources. There was an uprising in Brunei against Greater Malaya.

After Singapore, Sabah and Sarawak were handed to Malaya by the British on 16 September 1963 many Sabahans and Sarawakians were still hostile to Greater Malaysia. The date 16 September, 1963 had been viewed by many Sabahans and Sarawakians until today as, “Occupation Day” as there was no free and genuine expression of the people’s will such as a referendum to freely choose between federation with Malaya or independence.

The inclusion of Sabah and Sarawak as part of Malaya or Malaysia is viewed by many international legal experts as having established without obtaining the proper consent of the peoples of Sabah and Sarawak and was done in violation of international law. Based on the advisory opinion delivered on 25 February 2019 by the United Nations International Court of Justice (ICJ) in the Chagos Islands case, it is clear that Malaysia Agreement 1963 (MA63) signed between Great Britain, Malaya, Singapore and the Borneo Territories to legitimize the formation of the Federation of Malaysia, is null and void from the beginning. Without a valid Malaysia Agreement 1963, the formation of Malaysia was illegal and Sabah and Sarawak effectively annexed by Malaya into a de facto Malaysia. 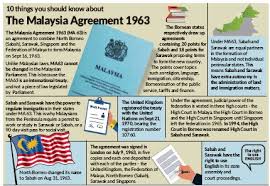 Another legal point that has to considered is that, the destiny of Borneo territories was “fixed” well in advance of the Cobbold Commission, Inter- Governmental Committee and the Malaysia Agreement was signed without consultation of the peoples of the Borneo Territories.

The Malaysia Agreement, titled, “Agreement on the setting up of the Federation of Malaysia” was drafted and signed between the British Prime Minister Macmillian and Tunku Abdul Rahman was way back in 1962. This Agreement was annexed to it with the framework of initial state constitutions of Sarawak and North Borneo. Please refer to Agreement on the setting of the Federation of Malaysia (National Archive, London 140 DO 16912723 no.16A 31 July 1962) 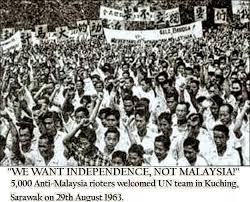 But, for reasons known to themselves, BN/GPS government chose to stay in Malaysia, helping Malaya with Sarawak’s oil and gas and its other wealth. Perhaps, the desire by BN/GPS government to stay with the federation is motivated by fear of present leaders losing control of the state government if it is not back-up by the federal government. 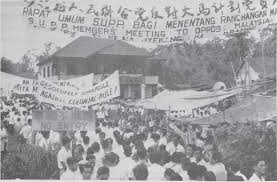 Until today the peoples of Sabah and Sarawak continue to seek freedom and independence from the federation of Malaysia, which, many come to view as a fraud under international law.

Malaya then changed its name to Malaysia. The reasons for change of name was given by Dato Ong Yoke Lin was recorded in the United Nations as being that there was no new state created but the addition of three new territories with the federation’s name changed to “Malaysia” on 16 September, 1963. However, the real reason why Malaya had changed its name to Malaysia was to avoid applying for membership as a “new state” because of fear of opposition by UN members who saw the creation of Malaysia as a “neo-colonial operation” accomplished without the concurrence of the people.
Therefore, the Federation of Malaysia was in fact, a de facto creation and there was no creation of a new nation. 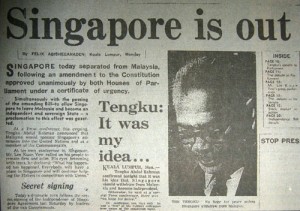 Economic and political differences with Malaya saw Singapore left the Federation of Malaysia by 1965.

According to an Australian historian Dr. Greg Poulgrain who researched the formation of Malaysia, saw the primary impetus for forming Malaysia was oil, not ethnicity, even though much was made in the press then and in the mainstream books since the Tunku’s insistence in having the Borneo colonies “on board” in order to racially balanced out” the Chinese population in Singapore with the indigenous populations in the Borneo Territories.

It was disclosed by colonial officers, Capt. D.R Gribble and Capt. Albert Young that it was known to the authorities that there was huge oilfields off-shore Sarawak in 1958, years before its “official discovery” in 1963.


The British were prepared to surrender the oil in Sarawak territory to Malaya upon Sarawak becoming part of Malaya. Sir Anthony Abell, the then Governor of Sarawak, in April 1956 observed in a communication to the Colonial Office that, “…the politicians in both Malaya and Singapore were showing considerable interest in the Borneo territories, including its empty spaces, its potential wealth, and its oil”.

It is correct to say Malaya had “imperialistic designs” even before Malayan independence in 1957, despite PM Tunku Abdul Rahman’s denials in order to avoid this being seen as a reason for merger with the Borneo territories.

The pursuit of Malayan colonial interest, saw the federal government passed laws and amendments of the federal constitution at its whims and fancies to disempower Sabah and Sarawak to their great detriment. Being out numbered in parliament, members of parliament from Sabah and Sarawak had no way to oppose Bills against their interest tabled in the federal parliament to become law (Comment Note: The reason for inability to oppose is given further on seat allocation)

The highly questionable and constitutionally Petroleum Development Act 1974 has been used to “legally plunder” oil and gas reserves of Sabah and Sarawak from 1976 until now. 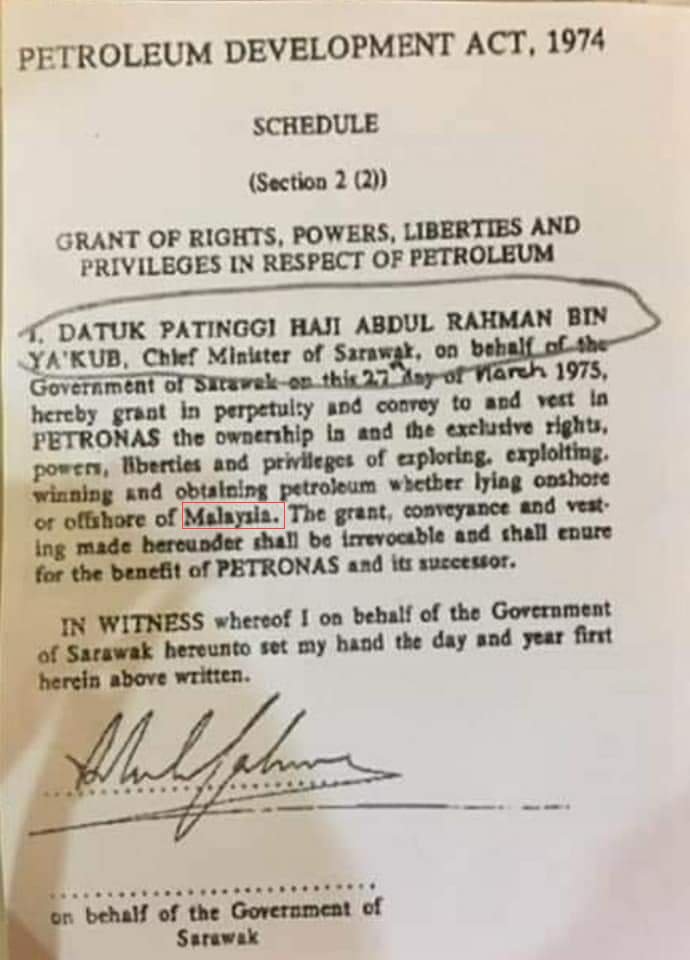 CM Abang Johari Tun Abang Openg had made it clear that Petroleum Development Act 1974 (PDA1974) and Territorial Seas Act (TSA 2012) are not relevant and could not be enforced against Sarawak (please see March 8, 2018 Borneo Post Online). This was consistent with the opinions of legal experts that these Acts are unconstitutional as the surrender of these petroleum resources had never been approved by the Sarawak Legislature.

Further, it is the opinions of many international legal experts whom I had personally consulted, that Malaya has no legal right to take our Sarawak’s petroleum resources as the Sarawak petroleum was not subject to negotiation in Malaysia Agreement 1963(MA63). The Petroleum Development Act 1974 (PDA74) simply is in breach of this right.


Now, under Abang Johari Tun Openg’s leadership, the GPS government has turned around to recognise the Petroleum Development Act 1974 as a valid and enforceable between Sarawak and Petronas. It should be considered that Abang Johari Tun Openg had made a high handed and arbitrary decision which was not even endorsed by the Dewan Undangan Negri. Those leaders who agreed to let go the oil and gas resources so easily to Petronas and the federal government need “brain surgery” by the people of Sarawak.

By a stroke of a pen this U-Turn, will see the loss of Sarawak’s oil and gas rights to Petronas and the federal government forever.
Parti Bumi Kenyalang wish to inform the Sarawak people and the federal government that, the Party oppose this arbitrary decision and reserve its rights to reclaim 100% of all Sarawak’s oil and gas resources with all revenues from these resources be for Sarawak only!
The GPS government had considered the dispute with Petronas as settled, and even agreed that, the present 5% Sales Tax imposed on Petronas be gradually reduced in years to come.

From a nation, Sarawak effective from August 27, 1976 was reduced to become a state after the amendment to Article 1(2) of the Federal Constitution came into force and it might be argued that with the surrender of petroleum rights, Sarawak has been firmly made a colony of Malaya.

The Sarawak government officials, especially, the State Cabinet since Tun Abdul Rahman Yakub, then followed by Tun Taib Mahmud and now, Abang Johari Tun Abang Openg should deserved to be blamed by Sarawakians for the erosions of many of Sarawak’s rights. The late beloved Adenan Satem once said, “…I dare say that the State government officials, especially the State Cabinet, must also be equally blamed” – please see by David Isaiah July 24, 2016 Sarawak Voice.

“Equal partnership” within the federation of Malaysia is a myth because under Article 32(3) of the Federal Constitution, no Sabahan or Sarawakian shall be eligible to hold the office of Malaysia’s Head of State, making Sabah and Sarawak symbolically inferior to all other states of Malaya.
It has also been observed that the federal government’s incremental power-grabbing and the implementation of positive discrimination towards non Malay-Muslim groups led to dissatisfaction within Sabah and Sarawak.

The greatest point of contention between Sabah, Sarawak and the federal government was the way the Malaysia Agreement 1963(MA63, if valid) has been overridden by various means. The MA63 had a number of provisions which ensured the “autonomy” of Sabah and Sarawak on a number of agreed matters which included “Borneonization” (concept of self-determination) to allow control over immigration, education, budgetary payments, religion, language, representation in federal parliament, and citizenship.

The feeling of Sarawakians that Sarawak is a colony of Malaya is greatly felt in recent years. This is because the Sarawak BN/GPS government is impotent to protect Sarawak’s right thus allowing it to be made it a dependency or vassal of Malaya. Sarawak BN/GPS government had also failed, neglected or refused to fight for agreed MA63 seat allocation of all 222 seats in federal parliament been given to Sarawak. At the moment Sarawak has 31 and Sabah has 25 parliament seats, in which, combined together is less than one-third of all seats in parliament.

Caused by fundamental breaches of MA63 and the federal constitution, it is a legal opinion that MA63 been terminated. The fact that Singapore had exited from the federation, had also caused MA63 to be void and Malaysia as a federation should collapsed.

This had made the federal parliament being seen by many politicians and Sarawakians as a rubber stamp to take away many of Sarawak’s rights, thus, making Sarawak beggars for funds and return of its many lost autonomous rights.


In Quest Of Independence

* Pictures and Videos shared here are properties of respective original owners, we share them here for educational and research purposes and their views not necessary represent our views and opinions.