Fighting to give Sarawak a better deal 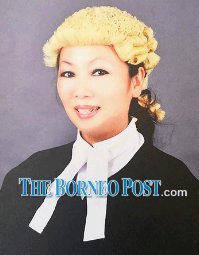 (Borneo Post - DANNY WONG ON MAY 24, 2020) DOWN-TO-EARTH and determined to fight for fairness and justice for all Sarawakians even if it means stepping out of her comfort zone — that’s Priscilla Lau, a lawyer from Sibu.

Currently, the secretary-general of Parti Bumi Kenyalang (PBK), the 51-year-old legal practitioner said she chose to return to Sarawak, Sibu in particular, after living in the UK and Australia for 15 years.

“Sibu is my home and always will be. I dream of the day when Sarawak will be free and the scourge of poverty eradicated with the people enjoying a better standard of living.”

She noted that Sarawak is a land blessed with abundant natural resources — more than enough for its people.

Hence, she said she will to continue fighting to uphold fairness and justice for the people of Sarawak and safeguard the interests of the state.

Lau said she had led a “very protected” life, revealing that her father had always reminded her to mind her own business and keep the peace.

So when she decided to venture into politics in 2016, her father was very upset with her as he felt she was putting her life in danger by being in the opposition and daring to question the Malaysia Agreement 1963 and related independence issues.
During the last state election in 2016, her father refused to go to the polling station with the rest of the family and later, when he saw Lau had lost, he comforted her saying, “You don’t need to do this.”

“My beloved and much-respected father passed away the following year on March 24, 2017, due to complications from open-heart surgery. When I stood in GE14 (parliamentary elections) in 2018, I asked him to keep me safe,” she told thesundaypost.
grandfather, Lau Kah Tu, to take a boat in Ming Zhiang, China, and sail all the way Sibu in the pioneering days.

“He dreamed of freedom and prosperity for us all,” she said.
Kah Tu settled at Ensurai, across the river from Sibu town together with a group of young pioneers. He returned to China three times to bring more villagers to Sibu during the White Raj.

Kah Tu, affectionately known as ‘Mo Mo’, was the second headman after Wong Nai Siong.
According to Lau, her paternal great grandfather founded many charities and supported many schools, most notably the Chung Cheng School, the Kwong Ming School, and the Su Lai School.

He also founded the Benevolent Home near the old Sibu airport, which bears the last names of her grandfather and her father — Kuong Wuong.

Lau’s maternal ancestors — the Tings — were land and business owners, living across the river at Kwong Hua, and they founded the Kwong Hua School.

Her own parents had their education overseas. Her father graduated with a mechanical engineering degree in Taiwan and her mother with an accountancy degree in Melbourne, Australia.

Lau said her parents instilled in her and her siblings the importance of education and hard work from a young age.

“We were never given any fixed pocket money and taught to be wise with our needs compared to our wants.”

Lau and her sisters — Michele and Genevieve — were sent to the UK for their senior secondary education.

They were advised by Dr Ting Siew Hua to attend Rydal, a boarding school in Colwyn Bay, North Wales, where Lau completed her O and A levels.

She recalled while reading law in London, she took part in a beauty pageant offering a £1,000 winning prize and a TV set, among others.

“Back in the early 1990s, as students, we never had enough to spend and were constantly on a budget, so I was enticed to join the pageant.
Alone in London

According to her, it wasn’t easy being by herself in a big city like London.

When she first arrived there for her first year of university, she didn’t know anyone. Her friends from her boarding school were all headed in different directions.
She remembers pulling her 40kg luggage (no built-in wheels in those days) from Heathrow Airport onto the train and from there to her university’s halls of residence across a big park and two four-lane roads.

“I reminded myself if I didn’t help myself, no one was going to help me! So I pushed on.”
She recalled for her second university year, she had to look for a place to stay after arriving in London straight from an 18-hour flight from Singapore.

When it got dark after 4pm, she was forced to take up temporary lodging in a bed and breakfast’s basement for £100 per week.

“There were no windows or hot water but at least I got a free breakfast. I stayed for a week, attending lectures in the mornings and looking for permanent lodging in the afternoons.”

In the poorly lit basement, she would lie in bed, contemplating life in darkness as there was no natural light, electricity was coin-operated (inserting a 50p coin into the slot) and she didn’t have money to waste.

“Throughout my life, I always believe God put me in this world for more than just this,” she said, alluding to her circumstance at the time.

If there is one thing Lau said she cannot accept, it’s the injustice of bullying.

She remembers in boarding school she would stand up to the bullies who were senior boys intimidating the juniors to do chores or carry their books and files.
“I was frequently told to mind my own business but I always stood my ground and slowly the bullying died down. I was among some 10 non-white students at this school of thousands and it was at a time when racism was rife,” she recalled.

During her final year, she would take her daily walks to Leicester Square and Chinatown from her halls of residence.

One day as she was passing a Chinese restaurant — and salivating at the sight of roast meat hanging in the display cabinet — she happened to see an elderly dignified gentleman sitting just inside the entrance.

Recognising him as a respected family friend, Lau politely approached and called out Granduncle Yii Peng. He smiled warmly and invited her to join them for a meal.

“Though craving for a good Chinese meal, I had to decline as my next lecture was starting soon. Granduncle Yii Peng then reached down and gave me an angpow.

“When I returned to the basement after the lecture, I was so happy to find he had given me £100 which meant a lot to a student on a budget like me. I will always remember Granduncle Datuk Hii Yii Peng with heartfelt gratitude,” she said.

On one of Lau’s visits with him, he told her the secret of his success.

Hii used to own only one acre of rubber trees whose land title the Rajah and Lau’s great grandfather Mo Mo co-signed to Hii’s father.

“Granduncle Yii Peng subsequently turned the rubber garden into his present dynasty. And yes, his secret is to be frugal with your finances.”
Lau used to sit down with pioneers like corporate figure Datuk Amar Ling Beng Sung and listen to their stories.

“Datuk Amar Ling would tell of how they came with only their shirts on their backs from China and through sheer hard work, became successful businessmen.”

She had also sat down with another corporate figure Tan Sri Ling Beng Siew and his son Dr Philip Ling.

She said after chatting with them, she told her sisters she felt they were truly on a different plane when sharing ideas and challenges — and they were not easily discouraged.

“I know when I say these things nowadays, many will be sceptical and have negative comments but unless you had had the chance to sit down with them, it’s hard for me to explain.”

When Lau visited Ming Zhiang, China, for the first time at the end of last year, she sat down with the village elders for four days, listening to and learning from them.

According to her, the Foochows are of pioneer stock who are used to hard work as evinced by the gritty early settlers. For instance, her great grandfather Mo Mo came to Sibu at age 19 to farm as per the White Rajah’s directive without actually knowing what he was getting into.

In Ensurai, the pioneers built a 300-room house for the every of them and their families while working the land together.

The early settlers worked hard to start a new life and when they were able to sustain their livelihood on the farmland, the plot would be signed over to them in perpetuity.

Lau said it had been 119 years since her great grandfather set foot on the Land of Hornbills but he never got to witness the formation of Malaysia and the many related history-making events.

In 2008, when her older son, Brandon, was in Primary 4 and younger son, Jordan, was just starting Primary 1, she noticed the education system left much to be desired.

So she took it upon herself to apply to the Education Ministry for an international school licence and it was not until 2010 that approval was given.

“I did everything from scratch without anyone to help me. In Sarawak at the time, there were only two schools with international licences — Lodge School and Tunku Putra School.”

In 2014, her brainchild — Woodlands International School — opened its doors.

“God was with me the whole way,” she said.

She was admitted to Bar of Supreme Court of Victoria in 1995 and the High Court of Sabah and Sarawak the following year.

She stood as the candidate for Palawan in the 11th state election under the then State Reform Party (STAR) in 1996 and for Lanang in GE14 (2018) under the Peace Party.