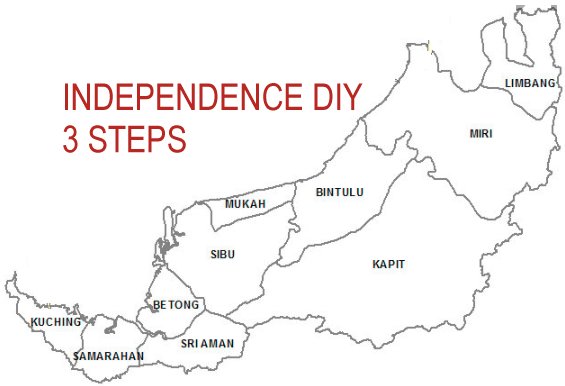 How do we become an independent nation? According to international practice, the following measures and conditions are necessary to achieving independence:

The Montevideo Convention on the Rights and Duties of States is a treaty signed in 1933, which became operative on 26 December 1934 and registered in the League of Nations Treaty Series on 8 January 1936. The convention sets out the definition, rights and duties of statehood. Most well-known is Article 1, which sets out the four criteria of statehood that have been recognised by international organisations as an accurate statement of customary international law.

“The nation or state as a person of international law should possess the following qualifications:

1) a permanent population;
2) a defined territory;
3) government; and
4) capacity to enter into relations with other states.”

Using the above criteria to assess Sarawak’s qualifications for statehood:

1) A permanent population
In 2018 Sarawak’s population was recorded as 2,780,000. Currently Sarawak’s major ethnic groups consist of Dayak, Chinese, Malay and over 40 other different sub-ethnic groups. Inter racial marriage is practiced among Chinese and Dayak.

The Dayak people are native to Borneo, migrating to Sarawak from the central Kalimantan region. In the 12th century, this region was home to the nation of Nansarunai, founded by the Ma’anyan Dayaks. Currently the Dayak people make up 30.3% of Sarawak’s population.

The Chinese first came to Sarawak in the 6th century as traders. Another wave of Chinese arrived with the economy’s development in the 18th century. Over the 200 years since, the Chinese population has grown over generations contributing significantly to the economy and commerce. Currently Chinese make up 24.2% of Sarawak’s population.

Sarawak’s Malay ancestors originated from Brunei in the 15th century. They developed Sarawak’s unique version of the Malay language, and currently make up 24.4% of the population of Sarawak.

Sarawakian passports are uniquely coded and as such, only suitable for use by Sarawak citizens. Likewise, IDs for Sarawak citizens are numbered differently from peninsular Malaysia. This was changed by the federal government with the intention to obscure Sarawak as a sovereign political entity.

Out of the 195 countries in the world, Sarawak would be ranked in between Lithuania (139th) and the Republic of Gambia (140th). In terms of population size it would be 3299 times the size of Vatican City, which is a country with only 799 citizens. Therefore Sarawak is more than qualified to meet "a permanent population" qualification.

2) A defined territory
Sarawak is located on the north-western part of Borneo Island. Sabah, Brunei and Kalimantan make up the rest of Borneo. Sarawak’s land area was defined in 1905 as 124,450 square kilometers. Under international law, a sovereign country, country, or simply state, is a political entity that is represented by one centralised government that has sovereignty over a geographic area. Sarawak is therefore a sovereign country.

Of the 195 countries in the world, Sarawak’s territory would be ranked between Nicaragua (96th) and North Korea (97th) in land size. Sarawak has never had any disputes over territory with her neighbours.

3) Government
Sarawak has had a government system since 1841, and currency in circulation since 1858 (the Sarawak Dollar). Sarawak’s legislative assembly was established on 8 September 1867, and is one of the world’s oldest functioning legislative bodies. Sarawak currently has its own elected government, constitution, legislation and Executive Council. Sarawak commenced its popular election in 1969, forming a government through a transparent and democratic process. Sarawak has hosted 11 state elections since and this has historically been a peaceful and smooth process. The State Assembly administers a number of departments, including the Ministries of Agriculture, International Trade, Tourism, Culture, Welfare, etc. This has lasted for over half a century.

4) Capacity to enter into relations with other nations
According to declarative theory of statehood, a sovereign state can unilaterally declare independence. However, unrecognised states will often find it difficult to establish diplomatic relations with other sovereign states. But, unilaterally declaring independence is not proscribed by the international law. Therefore, recognition by other states is a political issue and not a legal one.

Basically, as long as the sovereignty was not gained by military force, and the state is not in violation of international law, it will usually be recognised by the international communities.

Therefore if Sarawak wants to become independent, it must initiate talks with powers such as the UK and China, and inform the ASEAN countries that Sarawak intends to join the international community as an independent member, in order to continue to promote and defend Sarawak’s human rights and rainforests which are the lungs of the planet Earth. By fulfilling the obligations of a recognised nation to develop peacefully, Sarawak would aim to gain support from other countries.

Looking at the criteria set out above, Sarawak has already fulfilled 80% of the requirements. Out of the remaining 20%, 15% will rely on the determination of Sarawak’s citizens. Such determination depends on their understanding of the process of gaining independence, their confidence in their state after gaining sovereignty, and how not to be misled by the propaganda from the Malay Federation and the current Sarawak government. Support from the international community must also be built.

The other 5% will depend on international support. This must be pioneered by a party that fights for Sarawak’s independence (currently Parti Bumi Kenyalang ). After being elected into office as the biggest party in the state assembly, the party will need to send representatives to the UK, China, Singapore, Brunei and others to seek support.

International support can be gained based on moral grounds, or a nation’s self-interests, or both. Sarawak was once a British Colony, and was forced by the British to form Malaysia with Malaya, leading to Sarawak’s exploitation under Malaya for over half a century. The British would be duty-bound to support Sarawak based on moral grounds.

Lee Kuan Yew, the founder of Singapore, was also a culprit in advocating for the formation of Malaysia. Singapore, too, would be obliged to support Sarawak independence on moral grounds. Support from Singapore could also be gained by negotiating on the use of Sarawak’s land for food production (currently pork for example), or military training bases (as done in Taiwan and Hainan Island) which are strategically beneficial to Singapore.

China may provide moral support as well as one based on self-interest. The Chinese Communist Party had once supported the Sarawak Communist Party. This led to the British and the US forcing Sarawak to form Malaysia in order to fight communism, for fear of the domino effect engineered by communist China. If not because of the above reasons, Sarawak would not have fallen into the trap of Malaya. Therefore, China is also obliged to support Sarawak independence.

On the other hand, the US is striving to block China from the South China Sea. Allowing Chinese warships to ply Sarawak waters will help China break the First Island Chain. In exchange, we could seek Chinese aid in exploring our oil fields which requires financial and technical strengths Sarawak is lacking. PetroChina Company Limited is the second largest petrol company in the world. Sarawak could aim to enter into a 80-20 joint venture with them in oil and gas industries which would be a win-win situation.

With its abundant oil reserves, Sarawak could aim to seek investment and co-operation with oil companies like Royal Dutch Shell and US Esso. Through investments, the big companies will in turn protect their own interests and use their influence to henceforth ensure the stability of the region.

Since 1990, 34 new countries have been born. Sarawak is a sovereign entity, has its own government, and its administration and democracy system has been functioning effectively for over half a century. Racial harmony is exemplary as well. Hence, declaring independence is well within reach. It all depends on the determination of the Sarawak government and her people. So long as her people, in pursuing a happy future, use their vote wisely, the creation of a new nation in three years is possible.