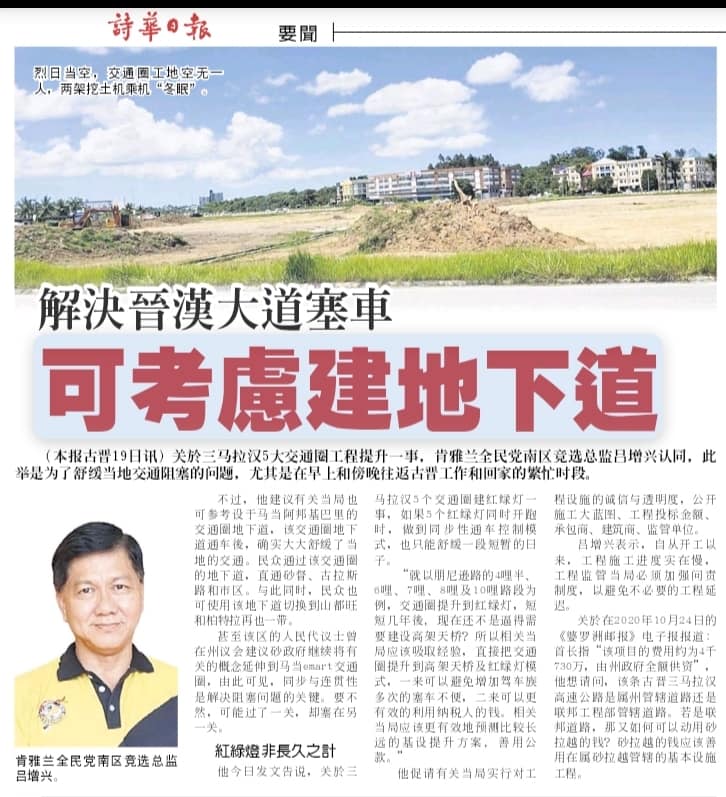 With reference to the upgrading of the 5 roundabout projects along Kuching-Samarahan Expressway, yes, it would alleviate the rush-hour extreme traffic congestion.

Those who ply the section of the expressway, know only too well, the journey from the first round after INTAN to the fourth roundabout at Tabuan Tranquility would take a good one and a half hours to 2 hours. A painful journey that is both excruciating and petrol wasting.

It has been suggested that the upgrade is to convert the roundabout to traffic lights, smart or conventional, how long can such mitigation last before another upgrade is necessary? Taking reference to the underpasses at third mile Timberland area and the other at Emart Matang where traffic passes through underpasses, these implementations do not have to be subjected to the waiting time of traffic lights. Traffic light, regardless if it is “smart” or not, the element of waiting is still there. Such underpasses ought to have been effective and feasible to alleviate traffic congestion, otherwise they would not have been implemented.

Second preferred alleviation method would be the combined traffic lights and flyovers. Not too long ago, the roundabout at 4½ Mile, 6th Mile and 7th Mile were upgraded with traffic lights, and now, in just a few years, another upgrade to flyover plus traffic lights. The relevant authorities/agencies should have learned to upgrade with flyovers and traffic lights for the said 5 roundabouts so as to avoid causing/inflicting consecutive inconvenience to motorists. This would also allow more efficient use of taxpayers' money. All relevant authorities should proactively study and implement projects that could live into a longer-time frame.

< The relevant authorities/agencies must take responsibility for project implementation with integrity and transparency, making such relevant information available to the public for viewing on the agency's website like the engineering implementation/construction blueprint, project tender sum, contractors and so on.
Since the commencement of the project, the progress has been very slow. The project supervision authorities/agencies should take a proactive role to supervise with accountability to avoid unnecessary engineering delay.

It was reported on eBorner Post on October 24, 2020, "The cost of the project is about RM47.3 million, which is fully funded by the State Government". Is Kuching-Samarahan Expressway under the purview of Federal JKR (Federal Road) or is it under Sarawak JKR (State Road)? If it's a federal road, why should our Sarawak's money be used for the upgrade? Sarawak's money should be well spent on other infrastructure projects for the development of Sarawak.