Raymond Thong: Accountability and responsibility on the part of the GPS government needed for crucial projects completion on time 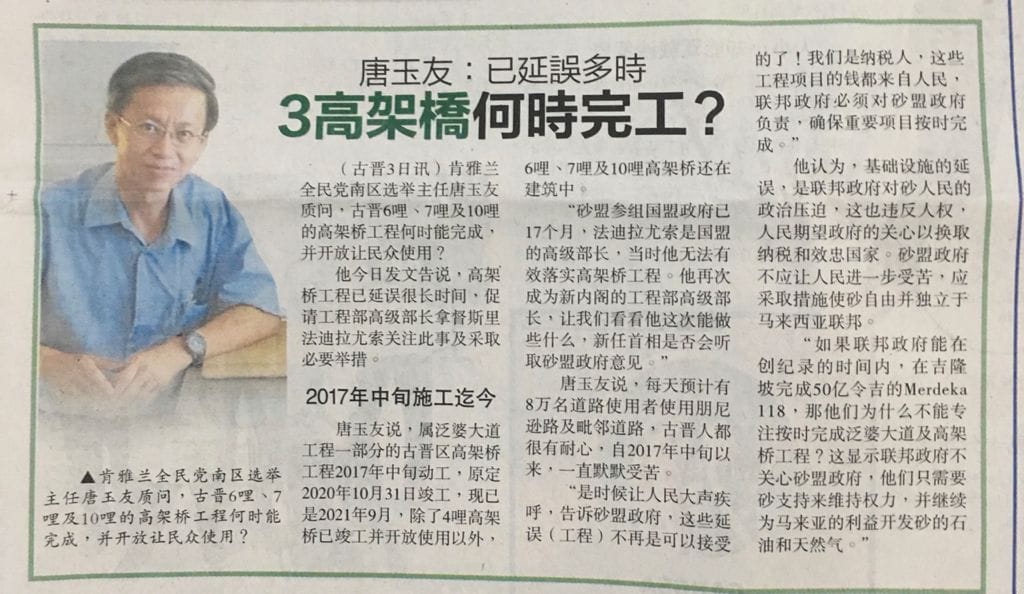 On August 14 ,2021 Senior Works Minister Fadillah Yusof said in Sibu, the Pan Borneo Highway in Sarawak was 69.60 percent completed. He said based on the contract, the full completion date was targeted to be in September 2022. According the the official website of the Pan Borneo Highway Sarawak, the long awaited completion of the 1060km stretch was scheduled for mid-2021.

The Pan Borneo was launched in 2015 by former PM Najib Razak and the late CM Adenan Satem.. Fadillah went on to say due to various constraints like the implementation of the movement control order, including supply chain problems and manpower shortage, delays could not be avoided. Sarawakians should expect a long wait before they can ever see the completed Pan Borneo Highway. Is this how the federal government including our GPS government treat Sarawak?

To further add salt to the wounds we hope the Works Minister Fadillah Yusof will do something about the flyovers still under construction at Mile 6, 7 and 10 in Jalan Penrissen. Works started in mid 2017 and it was supposed to be completed in Oct 31, 2020. Now is already September 2021 and only Mile 4 flyover is completed and ready for use. When are the flyovers at Mile 6, 7 and 10 going to be completed and ready for use? This project is part of the package under the Pan Borneo Highway. GPS was in the PN government for 17 months and Fadillah Yusof was then the Senior Works Minister and he was unable to complete the flyovers. Now with him back again as the Senior Works Minister under PM Ismail Sabri, let us see what he can do this time around and whether this PM will listen to the GPS government.

It is estimated 80,000 road users are using the Penrissen and the adjoining roads daily. The people of Kuching are patient lot and they have been suffering in silence since mid 2017. It is time for the people to speak up and tell the GPS government that these delays are not acceptable anymore. We are the tax payers and the money for these projects come from us. They must be accountability and responsibility on the part of the GPS government to ensure that these very crucial projects are completed on time.

Delays in infrastructure is a political oppression by the federal government against the people of Sarawak. This is also against human rights because citizens expected care from their government in return for paying taxes and allegiance to the country. Under international law and politics, the oppression is a legal ground to legitimize Sarawak to seek freedom and independence from the federation of Malaysia. The GPS government should not let the people suffer further but to take steps to set Sarawak free and independent from the federation of Malaysia.