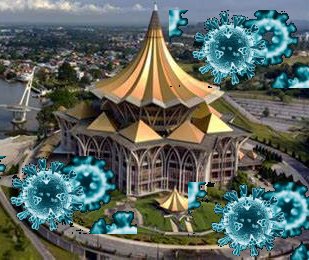 Sarawak people are worried by these frequent flyers in and out of Sarawak territories and wondered whether these agents actually complying to normal SOP especially with the recent sudden upsurge of Covid-19 positive cases in Sarawak?

With the growth of Parti Sarawak Bersatu (PSB) and more Sarawak natives and leaders quitting GPS component political parties to join PSB, and at the same time disagreement among GPS alliance is an ongoing matter making the Sarawak Chief Minister’s decision when to dissolve DUN a daunting task.

Undeniably, Parti Sarawak Bersatu is getting support from both local and federal influences so much so that GPS ministers see it as a threat and threaten to redraw timber licence interest/allocation map to omit those suspected to fund and give support to Parti Sarawak Bersatu. However, such threat has not yielded any fruitful results.

Beside Parti Sarawak Bersatu, there are other political parties, such as Parti Bumi kenyalang, NGO plus political parties’ alliance known as Aspirasi are also gaining support from Sarawak peoples as well.

Sabah recent election results showing 3844 ballot paper taken but not returning to ballot boxes and about 14,000 spoilt votes indicating voters are tired of empty promises and in Sarawak several projects like Sri Aman new hospital and other projects either never take off or half-completed and/or abandoned.

Sarawak government is happy with the 5% sales tax from Petronas while Sarawak people wants full ownership of oil and gas back with self-management of oil and gas and natural resources.

Despite all the effort of Sarawak government to create “feeling good” mood among Sarawak people it failed miserably in the onslaught of Covid-19 making early Sarawak election in 2020 a big risk to take. Sarawak people election mood might change better with the possible introduction of China vaccine end of 2020 or early next year.