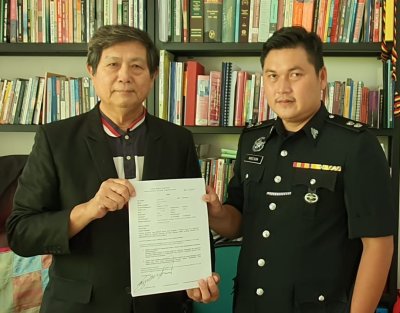 A few days ago a senior police officer came to my law office to take my statement, questioning me the reasons why the 11 plaintiffs filed the suit before the court concerning the formation of Malaysia. They are seeking among other reliefs, to declare Malaysia was a fraud and ought to be dissolved.

All these 11 plaintiffs of various races came from all walks of life throughout Sarawak. I gave more than sixty pages of my statement to the officer and he spent two days with me for the statement. I guess, he may come again to my office on instructions of his bosses over this matter.

I could refuse to give the statement because there are criminal allegations against me. Being person suspected of a crime, I have a right to remain silent under the law. I told the officer that the investigation against me is malicious and an abuse of police powers.

But, it gave me an opportunity to speak on many issues on how the federation of Malaysia was formed on 16 September, 1963. Many activists, academicians and lawyers saw fraud, harassments, unlawful detentions and arrests were involved against those who opposed the formation of Malaysia as illegal. Those who opposed were branded as “communists”. This was not correct under the law because citizens have a right to freedom of speech and expression.

Many who feared arrest and been forced to leave their homes and hid themselves in the jungle with some taking arms to resist arrests and to defend themselves. I showed all my research of all these to the police officer when I was giving my statement to him.

Personally, I viewed that the Cobbold Commission was used as a “front” or “cover” to legalise the making of the Malaysia Agreement 1963 (MA63).

In my statement, I also spoke about discrimination of Sabah and Sarawak by the federal government. I also raised the loss by Sabah and Sarawak of their sea waters, marine wealth, oil and gas resources after Malaysia was formed.