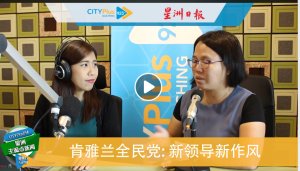 City Plus FM DJ with Sin Chew Newspaper Editor talked on news of the day and this time they talked about Parti Bumi Kenyalang and its newly elected President Voon L S and his relationship with the DAP Sarawak. News reported that Parti Bumi Kenyalang is the only political party taking Sarawak's independence as its mission for Sarawak people. News video is in Chinese.